The Biden administration released its $6 trillion fiscal year 2022 budget proposal on Friday, including $1.5 trillion in discretionary spending across federal agencies.

The discretionary request seeks $769 billion on non-defense spending and $753 billion in defense programs. Of that, $715 billion is tabbed for the Department of Defense – essentially flat from 2021.

The proposal includes $58.4 billion in IT spending across civilian agencies. The aggregate figure for DOD IT spending was not broken out in the documents, but should eventually be posted to the federal IT dashboard. The FY2021 figure was $37.7 billion.

On the workforce side, the Biden administration is proposing a 2.7% pay raise for civilian feds. That matches the pay raise being funded in the DOD budget request.

The budget also includes a $500 million plus-up for the Technology Modernization Fund, which would make the total capitalization of TMF about $1.7 billion. The administration has been touting the revolving fund of no-year money as a vehicle for agencies to modernize legacy IT and shore up cybersecurity.

The proposal includes a request for $100 million for Department of Labor to develop state unemployment insurance IT solutions “that can be deployed in states to ensure timely and equitable access to benefits.” The proposal says this effort will “[set] the stage for broad changes to modernize the program.”

The Biden administration features plans to accelerate cloud adoption, noting how the use of such technologies “positioned federal agencies to convert to maximum telework during the COVID-19 pandemic” while “rapidly and proficiently enabling the continuity of their missions.”

The tech budget represents “a real commitment from the Biden administration that IT is fundamental to delivering on the Build Back Better agenda,” Matthew Cornelius, executive director of the Alliance for Digital Innovation, told FCW. “The increases at almost all agencies is an attempt to rectify the constant cuts that agencies saw in the previous administration.”

The administration is proposing a 2.7% average pay increase across the civilian federal workforce, although the proposal doesn’t parse how locality pay would be factored into that.

Rep. Gerry Connolly (D-Va.), the proposed pay raise as “great progress towards the goal of competitive compensation for our federal workforce.” He also called on his colleagues to pursue his longtime goal of passing his bill that would give feds a 3.2% raise.

“After decades of under-investment in a modern-day workforce, a failure to partner with labor unions, and ongoing, unwarranted attacks on its independence, the civil service is in need of repair and rebuilding,” it reads.

Biden’s request calls on agencies covered by the Chief Human Capital Officers Act to participate in a new centralized, government-wide hiring assessment support team set to improve hiring outcomes, especially for technical and otherwise difficult-to-fill positions. It also calls on these agencies to “create and fund talent teams at the component levels.”

OPM is going to provide agencies with comprehensive guidance on hiring flexibilities and competitive hiring practices to “facilitate a talent surge into Government.” This will also include regulations that facilitate bringing back former feds by allowing agencies to rehire them “at a grade commensurate with the experience achieved while working outside of Government, rather than limiting such employees to the grade level where they were when they left.”

The budget would require agencies to revive their internship programs and include internships in workforce planning. The number of paid internships in government dropped from over 60,000 in 2010 to 4,000 in 2020, the budget says.

Biden is requesting a total of $197 million for the Office of Personnel Management, an increase of $37 million over last year’s funding. The budget also calls for $46 million for the Merit Systems Protection Board, a quasi-judicial agency that hears appeals from feds on agency personnel actions. That’s an increase of over $1.5 million. The Federal Labor Relations Authority, the agency that governs labor-management relations in the federal government, is slated for a little over $29.2 million, as compared to $26.6 million last year.

The White House is seeking $9.8 billion for cybersecurity funding to secure federal civilian agencies. The budget also includes an additional $500 million for the Technology Modernization Fund and $750 million to respond from the hacking campaign against SolarWinds.

The Biden budget cites the SolarWinds hack multiple times as justification for its cybersecurity-related requests, although it does not appear to mention the president’s recent executive order.

Civilian departments and agencies collectively are seeking $1.2 billion more for cybersecurity-related investments than they did in FY2021. Year over year, DHS is aiming for the largest agency increase, requesting roughly $300 million more than last year.

DHS’s budget request for the Cybersecurity and Infrastructure Security Agency includes $1.6 billion for operations and support and $418 million for procurement, construction and improvements. CISA is also requesting $20 million to establish a Cyber Response and Recovery Fund, an idea that has gained bipartisan traction in Congress recently. Overall, the new budget boosts CISA’s funding by $110 million compared to FY-21.

At the Energy Department, the agency is seeking $201 million for its Cybersecurity, Energy Security and Emergency Response office, which leads DOE’s cybersecurity efforts, roughly a $50 million boost from last year.

The Justice Department is requesting $78 million for efforts related to responding to SolarWinds. The agency’s chief information officer, according to the new budget request, has dubbed preventing, detecting and responding to future espionage attacks as a “top priority.”

The FBI is asking for $40 million focused on conducting cyber operations with other government agencies and will use the money for threat identification, analysis, and attribution; synchronized interagency operations; and cyber workforce development. An additional $15.2 million will go toward enhancing the FBI’s own cybersecurity posture.

The Defense Department’s fiscal 2022 could be a pivotal year for the organization’s goal of advancing its technological capabilities with strong modernization investments in research and development and communications and computer systems.

Defense Secretary Lloyd Austin told House appropriators at a May 27 hearing that the $715 billion budget had “substantial investments” in nuclear modernization, missile defense, naval forces, long range fires and what could be the “largest ever request” for research, development, testing and evaluation.

The goal, he said, is to ensure “that we are focused on acquiring the right kinds of capabilities to be relevant in the future fight,” the defense secretary said, and work with the military services to identify systems that will become irrelevant for increasingly tech and cyber-heavy warfighting needs.

There’s $10.4 billion tagged for cyberspace activities in 2022, including defensive and cyber hygiene measures like incorporating zero trust and improving endpoint controls and credentialing. There’s more emphasis put on defense industrial base cybersecurity and the number of cyber mission teams is growing across DOD.

Gen. Mark Milley, the chairman of the Joint Chiefs of Staff, also testified May 27, saying the 2022 budget had a “bias on the future” compared to previous budgets that favored readiness efforts and that mastering — something that is evident in the Army’s budget request.

The Army’s integrated visual augmented system, also known as augmented reality goggles, continue to be a breakout star in their $173 billion budget request with $854 million requested under other procurement for fiscal 2022. The Army hopes to get 29,237 more of the goggles, which aim to prepare and train soldiers for any environment. In 2021, the Army was approved to get 26,304 units.

One of the biggest increases for the Army is in software and digital technology RDT&E. The service doubled its request from fiscal 2021 to $119 million. The Army asked for nearly $300 million more for electronic equipment, primarily for tactical surveillance, command and control. Electronic warfare investment request dropped nearly 50% to $48 million, compared to $113 for fiscal 2021. However, automation gets a lift at $378 million, a $55 million increase over last year’s enacted levels.

DOD is also requesting $436.5 million, a $25 million increase from last year, for Tactical Network Technology (TNT) modernization for the Army, which includes satellite and line of sight network connectivity. The Army is replacing outdated or non-sustainable components of its network over time with newer technologies that can handle cyber and electronic warfare needs.

“This budget addresses underperforming acquisition programs with unsustainable costs, adjusts funding to meet our overseas posture and operations needs, and divests in systems that lack the requisite capabilities so that we can invest in the emerging technologies needed to fight in the future security environment,” Rep Adam Smith (D-Wash.), the chairman of the House Armed Services Committee, said in an emailed statement. “Planning for funding in the base budget, as this request does, represents an important budgetary reform that supports transparency, fiscal discipline, and sound and predictable defense planning.”

Natalie Alms is a staff writer at FCW covering the federal workforce. She is a recent graduate of Wake Forest University and has written for the Salisbury (N.C.) Post. Connect with Natalie on Twitter at @AlmsNatalie.


Justin Katz covers cybersecurity for FCW. Previously he covered the Navy and Marine Corps for Inside Defense, focusing on weapons, vehicle acquisition and congressional oversight of the Pentagon. Prior to reporting for Inside Defense, Katz covered community news in the Baltimore and Washington D.C. areas. Connect with him on Twitter at @JustinSKatz.

Chris Riotta is a staff writer at FCW covering government procurement and technology policy. Chris joined FCW after covering U.S. politics for three years at The Independent. He earned his master’s degree from the Columbia University Graduate School of Journalism, where he served as 2021 class president.


Prior to joining FCW, Williams was the tech reporter for ThinkProgress, where she covered everything from internet culture to national security issues. In past positions, Williams covered health care, politics and crime for various publications, including The Seattle Times.

Mon May 31 , 2021
We’ve already heard a lot about Android 12, and news about iOS 15 is around the corner. For the last couple of years, the two operating systems have grown remarkably similar, though there are still key differences that set them apart. Where one is strong, the other isn’t far behind. […] 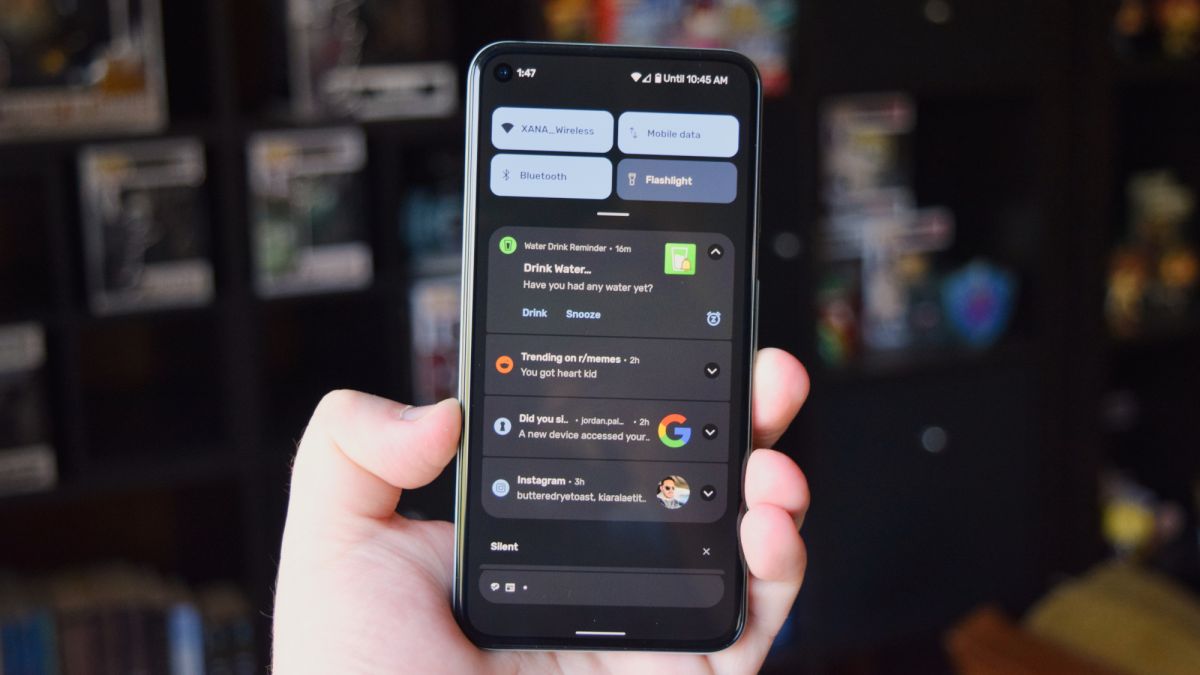